Ok so first a little back story... I was in Radio for about 13 years, I was a syndicated Mix DJ which basically means that I did those cool beat mixed continuous music shows. Different radio stations have mixes at different times but a lot of Friday and Saturday Night Party Shows. I mixed a few different music formats, I did 3 main shows, a Hip Hop Show,a House Music Show called the Digital Groove with my good friend DJ Marc Thrasher and an Old School Show. These mixed for San Diego stations Z-90, Channel 93.3 and Magic 92.5 as well as about 28 stations around the country including Houston, New Orleans, Las Vegas, Salt Lake City and others.

So that brings us to Friday May 27th, I still have a lot of friends at Z-90 and Magic 92.5 and they usually give me call to make their on-site shows happen if the venue doesn't already have a Sound System. Every Spring Z-90 holds a school spirit contest where area high schools compete to win an end of year- on campus concert by a Top Recording Group or Artist. This Year Rancho Buena Vista High in Vista overwhelmingly won the concert from the New Boyz. It's a really quick show, it takes place during or just after lunch so 30 minutes to move the kids in, do the show, and move the kids out. This show was outside on the football field so I had to bring in my friends at ProSystems AV for the Mini Concert Sound System. This system is HUGE! 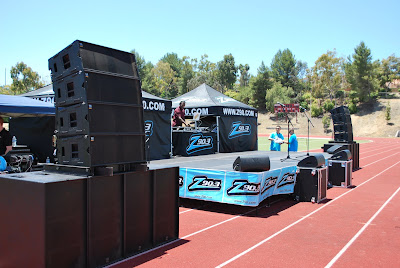 The New Boyz took the stage and didn't disappoint. 20 minutes of excitement and the kids were going crazy. 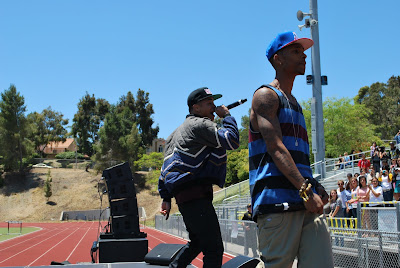 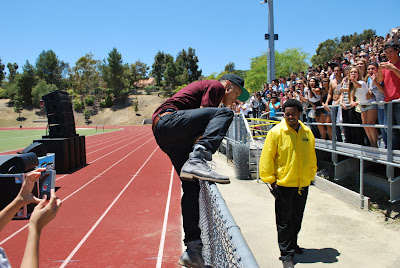 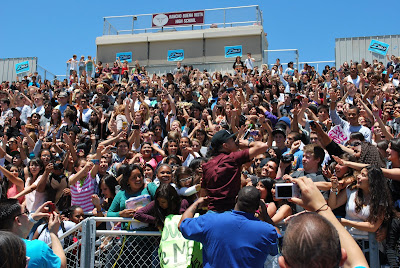 This is about the 6th year we've done this show for Z-90, past artists include Warren G, Soulja Boy, San Diego Native - Lil' Rob, Baby Bash played a couple of shows 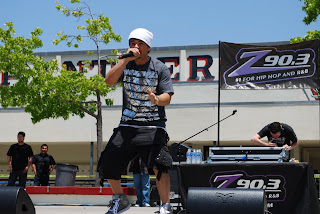 Posted by Spencer Bezy - Mobile Music Plus at 12:32 PM No comments:

I was recently part of a production team for "The A Gala" at the Beverly Wilshire Hotel. It's not really a DJ or Emcee event for me, I work with a team that makes sure the Fashion Show happens without a hitch. We're able to do this with the close direction of the Director who keeps her eye on the big picture. Everything from the perfect lighting to the music played and changed at precisely the right times.

The Gala honored a few of it's members including fashion designer Monique Lhuillier and after the evening's program Lhuillier thrilled attendees with a fashion show of her new Fall Line. Sorry no pictures but there were about 25+ designs including 4 wedding gowns that were all just amazing.

Here's an older picture of some of Monique Lhuillier's work.

Posted by Spencer Bezy - Mobile Music Plus at 12:07 PM No comments:

Named as Co-Director - The Association of Bridal Consultants

I was honored to be named as the new / incoming Co-Director of the San Diego Association of Bridal Consultants (ABC). The group consisting of a mixture of Bridal Consultants and other wedding related service providers focuses on promoting education and good business practices. I'll be serving along side fellow Co-Director Sabrina Cadini of La Dolce Idea, a fantastic wedding planner. I'm excited to jump in and help boost the local organization to new levels. There is already a great Board of Directors in place and membership is on the rise.

If you're planning a wedding the ABC is a great free resource to find some of San Diego's best Wedding planners, vendors and service providers. The members are a group of people who through their membership to the ABC, demonstrate that they are serious about beign the best of the best and continue to educate themselves and network with other like minded professionals to help them be their best.

Get more info at the ABC website or at my website www.mobilemusicplus.com
Posted by Spencer Bezy - Mobile Music Plus at 11:12 AM No comments:

Getting caught up on blogging some of these parties from a few months ago. This was a small but really fun group, they had their employee party in January with DJ and Karaoke. The group took a little while to warm up to the singing but they eventually got started. The Video is a little dark but you can still make out what's happening.

Posted by Spencer Bezy - Mobile Music Plus at 2:02 PM No comments:

I was lucky enough a few weeks ago to be part of a team to produce a Show in Beverly Hills at the Wilshire Hotel that was attended by Former First Lady Nancy Reagan and Fashion Legend Oscar De La Renta and the Master of Ceremony was Wick Martindale famous Gameshow host. The Show was great, it started with the Cocktail Reception and Lunch and flowed into the Fashion show to debut Oscar de la Renta's Fall line. Click Here for the LA Times Coverage of the event.

There isn't much correlation between DJ'ing a fashion show and a Corporate event or a wedding, but its a great qualifier. High profile fashion shows like this demand flawless execution by the DJ. Even small gaps in music and cues missed by factions of a second aren't acceptable. Luckily this is similar to DJing on the radio, "Live without a Net" I call it. My 13+ year radio career has taken me to a position where 100% flawless is the standard by which we measure all of our performances.

I know what is at stake for a Bride and Groom or for the HR rep for a company as they plan their party or Reception and that they are normally concerned with how they will look to their coworkers and peers.

My DJ's and I are in the business of making our clients look good EVERYTIME.
Posted by Spencer Bezy - Mobile Music Plus at 1:31 PM No comments:

This Spring I played a "wrap" party for the librarian's conference. It wasn't a big dance party, just a place for the conference attendees to come, eat and hang out until they had to leave for the airport. The Conference had ended a few hours prior the stage was still set for their closing session speaking engagement. If you're planning a corporate event with a stage, this is a good example of the perfect dual video screen set up. The lighting is perfectly mixed between static uplights and some subtle moving lights, not too busy not to plain.

Posted by Spencer Bezy - Mobile Music Plus at 1:14 PM No comments:

Daytime Wedding at the Prado in Balboa Park.

Spring 2011, I DJ'd a daytime in wedding in the Loggia Room at The Prado. A lot of people seem to think that no one dances at daytime weddings. That just doesn't seem to be the case. I will admit is a little tougher to get the dancefloor started, but once it gets going it can be just as fun as a nighttime Reception. The Key is getting a DJ with the experience to outweigh the daytime variable. Click here to get more info.

Posted by Spencer Bezy - Mobile Music Plus at 1:23 PM No comments:

Corporate party at the Town & Country

This group comes to San Diego every 3 years of so as they rotate their annual gathering around the US. It's international group of Insect scientists and related fields. I've provided DJ and some various other services for them for a few different years now. They're always rev'd up and ready to go and this year was now exception. This was a rockin' party! There were a few hundred guests attending the party in the courtyard at the T&C. A large percentage of the members are from India or of Indian decent so panjabi music is always a big hit and they love the Current Top 40 and some dance classics. For more info click here.

Posted by Spencer Bezy - Mobile Music Plus at 12:47 PM No comments: