The La Jolla Bridge Club is a pretty cool place to have a wedding. The Ceremony area is just feet from the water, you can hear the waves crashing. Even though the park is a very popular family beach area during the summer months, there are enough bushes and trees to block the both the ceremony area and the main lawn from the public area. Due to the size of this group dinner was buffet style out on the lawn, inside the club only seats 50-75 guests, but I really think with good weather outside is the best option.

The City of La Jolla has some noise ordinances that restrict amplified music outside on the lawn, but there are some tricks of the trade to still accomplish some light background music and announcements. The dancing is always inside (again due to the noise ordinance), dancing in the main area is preferred since the ventilation in the parlor is minimal.

Terry & Amber hired Gayle Feallock of Just Imagine Weddings to coordinate their wedding. I've worked with Gayle a lot over the years and she's great, I highly recommend her if you're looking for a coordinator. OH! and the party was good too...

Posted by Spencer Bezy - Mobile Music Plus at 9:46 AM No comments: 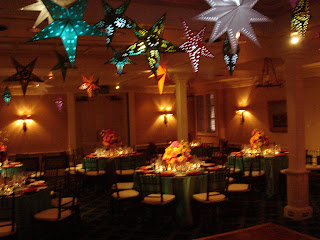 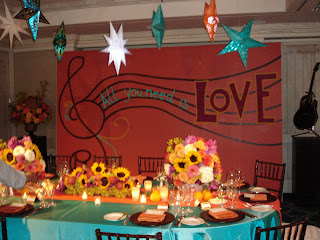 This couple wanted a twist on the traditional idea of their wedding reception. Held at the Rancho Valencia Resort in Rancho Santa Fe, CA, they asked to have all R&B music, from different eras was ok, but they really wanted to stay with the theme. I played a wide variety of music from The Temptations to Usher including Dinner music that was "A Soul Tribute to The Beatles" a great CD that has artists like Otis Redding and Wilson Pickett singing R&B versions of Beatles songs.

The group danced all night and we even had a couple of party crashers that heard the party and came in to join the celebration. This was a great idea to make this event different, but you really have to be careful when selecting a theme like this and decide which is more important throughout the course of the party, staying with the theme or playing the type of music that the party needs even if it isn't in keeping with the theme.

Posted by Spencer Bezy - Mobile Music Plus at 1:35 AM No comments:

This party was awesome! It was Brett's 40th Birthday and ALL of the guests dressed up in 80's costumes and there were some really good ones too.

I played 80's music videos for the first hour or so. Then the 80's Band, Lipstick & Leather took the stage. They rocked the whole neighborhood for about an hour including Brett belting out a party rocking, Crowd stopping, Police Helicopter circling over head version of Nothing but a Good Time. Yes, it doesn't happen very often, but the house was in what seemed to me to be a pretty quite area and the 80's band and people yelling and screaming proved to be a little too much for some of the neighbors and the police came in at 10pm on the dot. I'm happy to report that I had not started to play dance music by the time the sherriff came by. They didn't order us to stop, just to turn it down, way down. The last hour of the party I opened up the music to the more current top 40 and hip hop, but the volume was so low it wasn't really danceable any more. I wish we had more time, the crowd was really into it. It's great when the people dancing on the dancefloor are dancing and having a good time, but you can notice them every time they hear a new song checking the screens to see the video.

Posted by Spencer Bezy - Mobile Music Plus at 9:00 AM No comments: 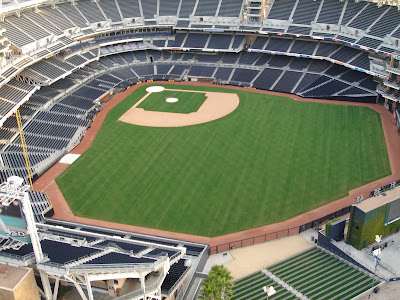 I love what I do, always new and exciting things to see and do. This is the view from the top of the Diamond View Tower overlooking Petco Park. The Padres were playing on the road this day but the Park in the Park is open for visitors even on off days. I've worked this location during games too which is really cool. You're so far above the field you can't really get into the game but its still the best view in the city. 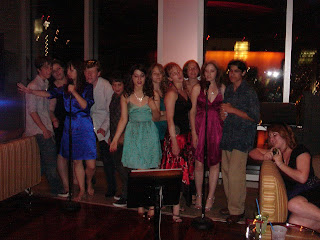 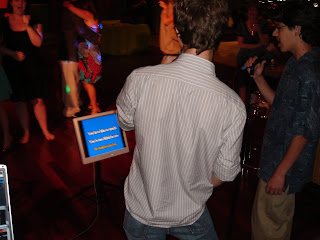 The party was only for a couple dozen people but they were a really fun and outgoing group, it was a Grad party for 3 girls from Coronado High School. All 3 were active in the school theater so Karaoke was natural fit.
Posted by Spencer Bezy - Mobile Music Plus at 9:30 AM No comments:

Chinese Wedding at the Four Seasons 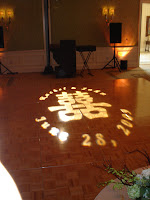 This was a great reception with a full lighting
package including a Chinese symbol gobo, spotlights
for the cake and 20 uplights inside and out. The
Four Seasons is a great hotel for a reception its a
bit more than some of the other venues but its a
true 5 star hotel from the facility to the service.
This wedding ran like clockwork thanks to the
great coordination of Anseth Richards of Creative Occasions . 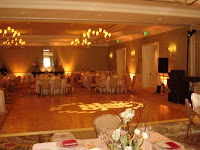 Posted by Spencer Bezy - Mobile Music Plus at 9:00 AM No comments:

Corporate Party at the Ivy Hotel

United Bio Source hosted a party for their convention attendees at the open air rooftop bar at The Ivy Hotel and had me DJ. This was more of a club style presentation than I normally do for a wedding. It was the classic look similar to turntables, flat on a table. They were really interested in Video DJ but decided they needed to use the video screens for their logo and branding. It didn't matter the group of 300+ guests danced all night.

It was cool background music for the first hour then I started to pick up the pace a little bit and eventually it was a fun mix of all the new hits, Flo-Rida, Lady Gaga, LMFAO as well as the fun 80s and some Latin and House/Trance too. I spent several years DJing in Nightclubs as well as my Hip Hop radio mixshow and "The Digital Groove" radio show so this was a fun return to a mostly nightclub style party. 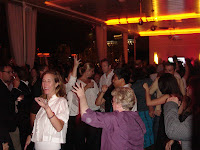 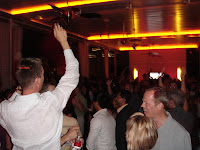 The mini video cam ran out of batteries and I didn't get very much footage before it died, but here is a little dance circle they had going at my end of the long narrow dance floor. Sorry the video is a little dark, partly from the lighting, partly from the low camera battery. It was great and went til almost 2am when the hotel finally said we had to stop for the night.

Scientists usually aren't known as the party crowd, but don't tell these guys!

Posted by Spencer Bezy - Mobile Music Plus at 12:40 AM No comments:

This couple decided on an early wedding, starting in the late afternoon going into the early evening. Their guests didn't seem to care, they danced anyway. This was one of those traditional wedding soundtrack parties. As I read the crowd and played music that followed their mood, I found myself playing a lot of those typical wedding dance songs.

As I always say, a Great DJ isn't one that always plays all the Hot New Music on the top 40 Radio Station that week or the most creative live mash-ups or music mixes. It's the one who plays the right songs at the right time to take that party to a level of success that the Guests, the Host and sometimes even the DJ didn't know was possible.

Posted by Spencer Bezy - Mobile Music Plus at 11:54 PM No comments: