Late fall 2011 I DJ'd a wedding and then the reception right afterward at the Seaside Forum. The wedding went perfectly, they were from Hawaii so the music choices for the wedding were mostly Hawaiian. The Bride is a Dance Music Recording Artist and normally when I have clients like that I try to avoid playing their music during the event, mainly just because its a little weird. But this one wasn't like that, she was perfectly fine with it. As a matter of fact, at first she gave me the track titles and didn't even tell me they were her tracks.

It was kind of a dance music crowd and pretty much the entire group recognized, got up, danced and sang along when I played the first 2 of her songs. By the time I played the 3rd song I honestly think I had worn them out. They danced solid for about 2 hours and were still dancing but I think they were pretty out of gas at that point.

I'll try to post more on this wedding later but I wanted to get this video posted ASAP. Joe Park is an awesome videographer, one of the things I like best is that you can have him create a teaser video for the wedding. Since the full Wedding Video takes weeks and weeks to edit in some cases, the teaser video just shows some of the highlights at a quick glimpse. As usual, he hit another homer with this one from Dec 3rd.

Posted by Spencer Bezy - Mobile Music Plus at 7:19 PM No comments:

This group came in for a few days, one of their nights was a party at Fox Sports Grill. It didn't take them long to get out on the dancefloor. Fox Sports Grill is a great place for a Corporate Party, plenty of space, night near the bay, indoor and outdoor mixed seating and plenty of video screens for sports or Video DJ would be amazing...

Posted by Spencer Bezy - Mobile Music Plus at 2:06 PM No comments:

Today we provided sound for Baby Bash to play a concert for University City High School, the students there won the concert in a Z-90 contest. This is the 3rd show I've done with Bash and this time he brought Frankie J with him. 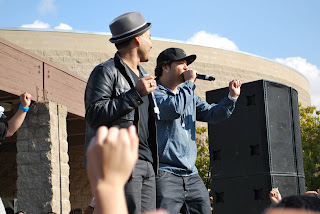 These guys are both pros, nothing like the egos and attitudes that I've encountered with some other big names. You can see that they are just happy to be there and doing what they love to do. Even though the show was only 29 minutes long, I think they actually played about 35. But then they both stayed and did meet & greet/Photo and Autographs for close to an hour.... C'mon who else does that? That's why Bash is one of my favorites to work with, Like I said, he's a pro.
Thank you to my team (Brad & Matt) that helped me pull off the show. 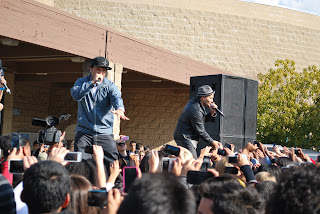 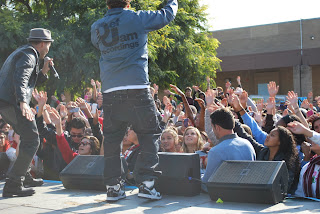 Posted by Spencer Bezy - Mobile Music Plus at 4:52 PM No comments:

This is the one everyone is talking about. A DJ friend of mine was in the LA area on a gig and talking with another DJ there about music when the topic of Dubstep came up and how well it is (or is not) working in SoCal. As I understand it, part of that conversation they my friend bought up that a friend of his (me) had just done a wedding with mostly house and dubstep music and the response was something like oh yeah I heard about that.

That doesn't surprise me though, the bride and groom are part of a group of people I've gotten to know pretty well over the years. They all work together but what they really all have in common is we're all friends of DJ Miss Lisa. Miss Lisa is one of San Diego's original and Pioneering DJs and has been a friend for about 16 years (wow that's a long time now that I think about it), she plays all over the world with some of the very biggest and high profile events. So since this is really one big circle of DJs and DJs friends, it seems like everyone there is a DJ (including the Groom was a DJ too). I don't mean like everyone there has a mixer and turntables in their bedroom...I mean like some of these guests have DJ residencies in some of the Biggest and Hottest Clubs in New York, many of whom make their own music and tour the world doing gigs for groups of thousands of people. I'm talking about the RockStar Circuit of DJs. Yeah! No Pressure! I don't talk about it often but I spent 13 years doing on air mix Dj work and was syndicated on multiple stations around the country, San Diego, Las Vegas, New Orleans, Salt Lake City and more (as many as 48 stations through the 2005-2006 timeframe). So I feel like I can hold my own, but I still found myself mentally reviewing every move I made throughout the night.
There were a lot of DJs there, I don't want to leave anyone out so I won't list them by name except for DJ Slynkee, thanks for your help. The one thing I'll say is that most of them came over to say hello, and they were ALL super nice and easy going and genuinely just there to have a good time.

The wedding was great though, it started off with a perfect ceremony at the Island Club on the Navy Base in Coronado overlooking the beach. The Groom and groomsmen arrived on the back of a Fire Engine with full Lights & Sirens. I provided music and a wireless mic (done the right way). For anyone thinking about an outdoor ceremony on any of the Navy Bases, you have to spend the extra money to do the wireless microphones correctly. Cutting corners in that department opens you up to all kinds of potential interference problems with the frequencies that the Navy uses. You only get one chance to get the Ceremony right. The $100-$200 you could've spent to do it right will seem like small change if things go wrong with the wireless mics.

After the Ceremony it was inside for the Cocktail Reception and then Dinner. After the traditional dances and toasts, I hit them hard Right out of the gate when open dancing started. With some of the pop / top 40 stuff and slowly working into Sexy & I know it (that was about 3 weeks before it started to play on radio, but again...the DJs at this wedding had all been playing it in their clubs and gigs for weeks at that point.)

If you really want to see the music video for this song, be warned. It's graphic but hilarious and probably my favorite video of 2011 Click Here

The rest of the night was a high energy dance party. I did work in some more recognizable 80s for the family and guests that weren't as into the house and Dubstep.
Here's the clip.

The only bad thing was that the club staff turned the lights on 10 minutes before the end of their party, but it didn't even phase this crowd.
Posted by Spencer Bezy - Mobile Music Plus at 11:40 AM No comments:

Destination Wedding at the Hard Rock Hotel with Uplights

A couple of months ago I DJ'd a Destination Wedding for a couple at the Hard Rock Hotel. Kristen at White Wedding Day Events did the big white backdrop behind the head table and dancefloor. I brought in 8 light violet LED lights and DJ'd the night for them.


You can get so much from Uplighting for the cost, with just 8-10 lights you can completely transform a room. It allows you to bring down the house lighting and the result is a completely costumized room. It can be one of the colors of your wedding or something to compliment your colors
Posted by Spencer Bezy - Mobile Music Plus at 12:28 PM No comments:

DJ & Uplights for a 18 yr Birthday

DJ and Uplights with a completely PINK theme. This party was for a group of people some of which were under 18, so to protect their privacy the video only shows shots of the uplights from before the party began.

It was great though, a few uplights and the rest were carefully placed area lighting. These Full Color LED lights that we use are so versatile and are some of the brightest available.

Posted by Spencer Bezy - Mobile Music Plus at 1:24 PM No comments: